Public Service Announcement of the Day

I would like to warn you all about the dangers of accepting weird guys you’ve just met on SnapChat*.

No, it’s not the random dick pics. That’s almost expected with the way my luck has been going lately (where do I meet these people?). It’s not the possibility of randomly clicking his name when sending some ugly face to your friend. It’s not even the awkwardness that comes with a dead SnapChat connection.

It’s that some guys are really really really freaking weird and will send you videos and photos multiple times a day of their friends doing exercises, drinking beer, or even–cringe–MySpace-style selfies (and some guys are nearing 30)…even if you don’t respond.

It may be hilarious, though. So it’s up to you.

File this one under “things I learned in Saskatoon”.

It may look nice, but this city is harbouring a hoard of awkward SnapChatters.

*for all of you very confused people: SnapChat is simply an app (that’s like a…program…on a smartphone) that allows you to send others photos or videos for only a few seconds until it deletes itself. It sounds more boring than it is.

I’m sure you have seen by now the screenshots of the idiotic remarks on twitter last night. One batch was about girls, children, who tweeted crap like “Chris Brown is so hot I wish he’d beat me!” and other things they’re just too ignorant and immature to understand the offensiveness of. I’m not going to get into that, because that would be one hell of a blog post.

No,  I’m talking about this phenomenon of idiots who are resistant to Google, for whatever reason.
Apparently “just Google it” has turned into “just ask on twitter and wait for someone else to Google it for you.” Anyone who has ever been on Yahoo Answers will attest to this, as your physical urge to punch someone/something rises with every post read. Don’t ever go on Yahoo Answers. Just don’t.

I have nothing left to say. I bet they try and CTRL+F textbooks.

It’s not even a Paul McCartney-specific thing. How many times have you posted something like “Yeah I love this new song by the Sexy Tigercats*” and someone asks “whut r they a band”

*Fake band-name, aka my future girl group I dreamed up as a delusional child. I would advise against Googling that. Don’t say I didn’t warn you.

For those of you who think like me, take note of http://lmgtfy.com/ and http://justfuckinggoogleit.com/, the most beautifully useful websites ever.

I will never understand this. Here is my totally lame cartoon that was funnier in my head (my graphic design-studying boyfriend left his adobe-[legitimately]-equipped-laptop at home, and I couldn’t resist). Missing are various Justin Beiber CDs, as I couldn’t put myself through drawing those on this trackpad. 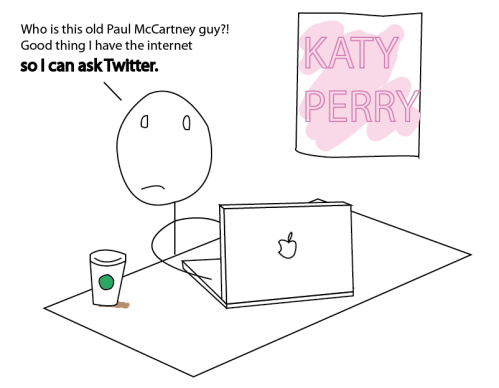 I can now use Illustrator, be warned.