They’ve lied to us. High school was not as positive as Degrassi or as fun and good-natured as Sabrina the Teenage Witch. There was no usual “hang out” that wasn’t full of angry looking 12 grade boys trying to buy Chinese food at lunch and scaring away the local families (it happened. There were complaints. Our students were assholes.)

No. My high school was in the middle of no where, overcrowded, and run by people who thought it was more important to ensure students weren’t on their cell phones at lunch than worrying about actual learning.

No one gave a shit about the football team (this is Canada, after all, where we have yet to build a 60 million dollar football stadium for a high school) and what is school spirit? Our colours were grey, silver, and black. What a cheerful-looking crowd we would have been.

So, whatever, TV never depicts real life, unless you live in the American South, where I assume every single high school on TV is modelled after.

University matched up slightly better, taking into account the majority of students at my school commute. We have pub nights and things, woo!

or the awfully unflattering outfit choices by Dunham

Well, actually when bus passes in your city cost a student $106 a month and rent is at least $700 with a few roommates…it looks like my parents are going to be roommates for a while.

And maybe, if I work really hard and score an actual full-time job after I graduate that’s not the retail hell my peers are stuck in, I’ll be able to almost afford a shitty apartment with a bunch of roommates. We’ll see.

Why are there so many centipedes in my house?

I am okay with spiders. I have held a millipede in my bare hands by choice. I have dissected an earth worm and a cow eyeball.

Last week, after the longest and worst commute of my life (read: 40 minute subway delay and more!) I got home at 11pm, pulled back the sheets on my bed and found two of these motherfucking things frolicking in my beautiful clean sheets. 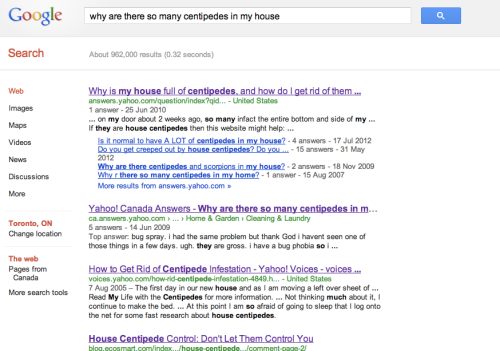 WHY ARE THERE GIANT PICTURES OF GROSS SUPER-LONG-LEGGED CENTIPEDES ON ALL OF THESE LINKS? WHY?

I suppose I shall be picking up every type of insecticide ever.

These things will rule me no longer.

The Burden of Houseplants

We recently moved from a large house with large rooms to a tiny bungalow (which, actually, cost $30 000 more than the large house. Oh, Toronto vs. outlying suburb housing prices, you so silly.) Admittedly, the large house was a little too large for the three of us who were used to living in doll-house like spaces, and the extra space was useless and left empty after my grandfather went to a home.

We’ve managed to rid the house of most of the superflous furniture, but there’s still one problem that’s become a bit of a hassle. The houseplants. 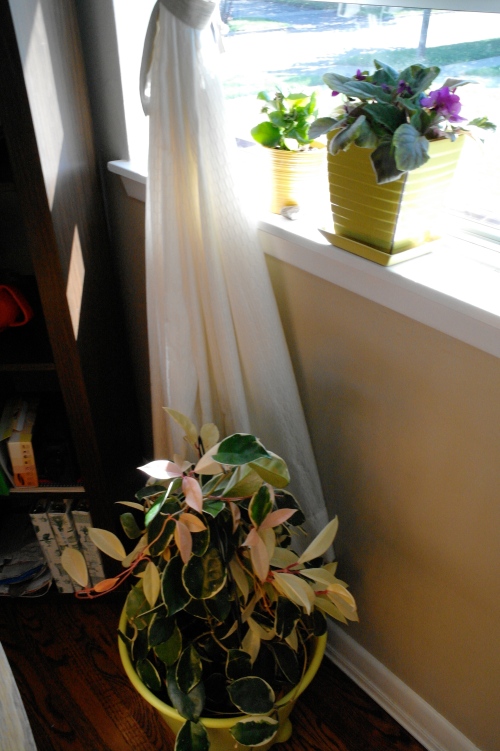 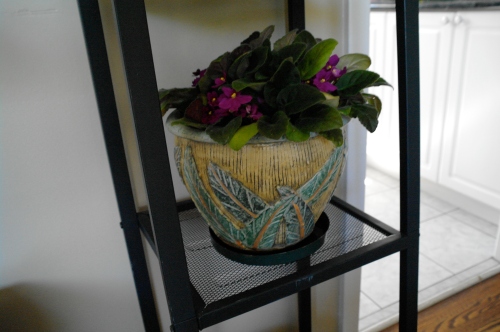 What do you do with them? There are only a certain amount of spaces in front of the window where they can thrive.

The ornamental orange was from a clipping my mom brought back from Florida over 20 years ago. The one on the bottom in the second picture was from a clipping another mother gave us when I was in first grade. The palm was one we picked up from Ikea to stage the old house.

It took me a while to get used to scrapping plants at work. We only sell the “best quality” product, so if a plant is wilting a little or maybe just needs a repotting or a little TLC, we usually just wind up throwing them out if no one’s buying. I hated it at first. We scrapped 50 potted Ranunculus in the spring, I remember. The leaves we a little yellow and they were getting scraggly, but still, give them a chance. Maybe I’m just a too much of a softie. (I’ve personally adopted two orchids that had already lost their flowers and two scraggly burning bushes that were brought back by perfectionist customers.)

What do you do with unwanted houseplants? Throw them out? Give them away? Sell them at garage sales? (I actually vividly remember my mom doing this as a kid. Damn spider plants, can’t stop them!) Stores don’t take them.

But, at home, these plants have been a mainstay in our home for as along as I can remember. After seeing so many houseplant returns and customers’ complete failures at maintaining them, I have to respect the skill my mom must have put into getting some of these to thrive for so long.

Maybe tripping over the jungle of houseplants once and a while isn’t so bad. It could be worse. My mom could be trying to over-winter a $2 geranium and some mums in ugly, half-dead states. Oh, wait. She is.